There have been many families closely associated with the development of Lorne.  Each family has its own unique story and some have shared their stories in books about the town. Lorne Historical Society has documented many of those stories for its history centre. If you wish to contribute information abut any of these families or indeed add an additional family, please contact us. 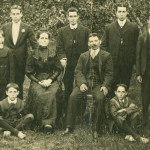 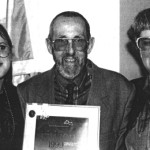 Jean and Malcolm Graham became involved in the society in 1988 when Joan Wheal accepted their kind offer to help mount the bicentennial display.  They became committed workers for the society, notably recording stories from the Geelong Advertiser, an amazing and valuable resource now recorded digitally.  Jean and Malcolm are life members of the society. The society’s collection is housed in a space dedicated to Malcolm.

In 1875 Jesse Allen and his brother William came to Lorne as orchardists for the Mountjoy family.  In 1880 Jesse selected 100 acres on the George River which he named Allenvale.  He married Sarah Anderson in 1884, the first marriage at All Saints Church on its present site.  They are photographed here with their seven sons in the orchard at Allenvale.

In November 1856, my grandfather John Stirling, then aged 15, migrated to Point Henry near Geelong from Paisley, Scotland. He was met by his father William Stirling, who had migrated to Australia a couple of years earlier. John was taken to Winchelsea where his parents were already well established. Eventually he married Jessie Lauder, the daughter of another pioneering family. John’s father died in 1865, at 56 years of age. His mother Janet won the respect of the townspeople and became known as everyone’s “Auntie Stirling”. She grew vegetables on a large plot near the present Winchelsea bridge and gave her produce away to the needy. Janet’s memory was cherished long after her death at age 99 in 1904.

In 1878 John moved to Lorne and – with the help of his son William – set about building Lorne’s first store and bakehouse with an attached dwelling. The family grew to 11 children, and in 1888 my dad, Johnstone “Jack” Galloway Stirling – the second youngest – was born next to the store. Jack learned his trade as a carpenter under the watchful eye of his brother-in-law Andrew Sanger, a well-known Lorne builder. Jack became the maintenance carpenter at the Erskine Guesthouse and in time married the housekeeper Annie Woods who had come from the tiny Victorian town of Amphitheatre. The marriage was blessed with three children; first my two sisters and then in July 1922, I was born at 4 Smith Street, Lorne, near the old Chalet guesthouse. I was given the name John Douglas Stirling, however I have always been called “Doug”.

Lorne Historical Society is a wealth of information about Lorne’s family histories, tourist information and the town’s historical walking tours. Remember to get in touch if you’d like more information or to become a member.